I’ve been to many industry conferences and awards and quite often they can be quite tense affairs, with people posturing and trying to impress at all costs.

I’ve just returned to Cardiff from attending the One Voice Conference and awards at the swanky Hilton Doubletree hotel opposite Canary Wharf in London and I have to say it has been an energising and fantastic 48 hours. The best conference I’ve attended in years, and the only one I’ve ever commuted to by boat!

It’s a conference for all involved in the voice industry, from gaming to TV continuity to adverts to promos to podcasts. And it was attended by the most welcoming fun bunch of people I’ve had the pleasure of sharing a hotel conference room with! The sessions ran like clockwork, it was live streamed for those who couldn’t make it in person, and even included socials like a boat party on Friday night. Who thought that was a good idea?

Here I am  on the Thames with one of the brains behind the conference, legendary voiceover Peter Dickson and Channel 4 continuity announcer Danny Cowan, who went on to win an award for Best Continuity Performance.

Sophie, our Voiceworks MD took to the stage on Saturday morning to extoll the virtues of the human voice in the text-to-speech world. She knows how to read the room! It’s a fascinating subject and interesting to hear from established voiceovers how they aren’t opposed to it, but it does need proper regulation and remuneration to safeguard all concerned.

Meanwhile in a breakout room I was hosting a session all about the power of audio and emotion. It was a fun session with lots of laughs and a few tears, as I proved how the human voice can trigger emotions more vividly than TV or social media ever can. 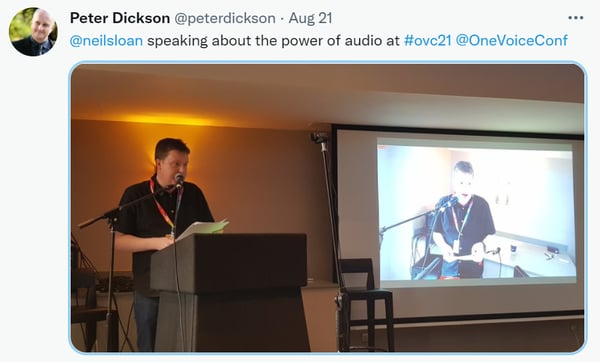 Saturday night culminated in the One Voice Awards, and while waiting for the event room to open I was approached by a gentleman asking “Is this where the awards are?”

Now, at a voiceover conference you’d expect to hear from some familiar voices, but I was quite taken aback to realise the guy asking me about the awards was Redd Pepper, the voiceover for all the biggest movie trailers you’ve ever heard! “In a world…” – that’s him! https://www.youtube.com/watch?v=6N5l0sgPP5k.

I was chuffed to be invited to be one of the selected few to be a judge for the One Voice Awards, and listened to some incredibly talented voices on the entries. And the warmth and appreciation in the room for all the winners was something to behold. We’ve all missed human interaction in the last 18 months, and it was fantastic to see the support and generosity of spirit from all the attendees. I really look forward to working with some of the great voices I met at the conference on Voiceworks projects in the months to come.

Sophie and I loved being part of the One Voice Conference #OVC21 – and we hope to see you for #OVC22!

One of the big issues with Voice Apps is how to keep users coming back again and again.

The demise of the touchscreen?

We used to think nothing of repeated use of shared physical touchpoints, whether that’s kiosks,...

Throughout the last year, video conferencing platforms such as Teams, Zoom or Skype have become the...